skip to main | skip to sidebar

A Year of Firsts

In preparing for the first birthday I knew I wanted to make a Birthday Board.

A Birthday Board is a fun creation I saw on How Does She. I love their tutorials and I knew it would not be a problem putting it together! I figured I would include 12 holes so that I could include a picture from each month of Jake's first year rather than the balloons as pictured above.
While picking up crafting supplies for the party, I found an alternative to the 2x4. I found wood block picture holders. They had 2 wires to hold the pictures and I thought, oh what an easy way out! :) I picked up 7 blocks and a scrapbook birthday package with paper and stickers. For the rest of the project I followed How Does She's tutorial.

I ended up changing my plans with the picture blocks and using them to display some of the major milestones in Jake's first year, hence A Year of Firsts. I displayed them in different places throughout the house. 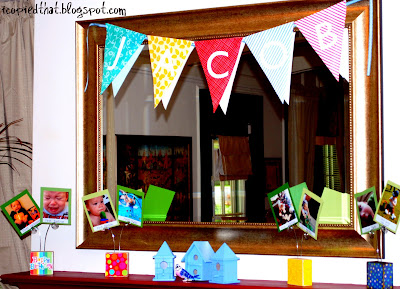 Jess-
I am a former teacher and a current stay-at-home mom to a precocious one year old. We try to keep busy with fun, hands-on learning activities.